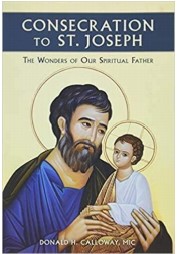 Pope Francis declared the “Year of St. Joseph” on the 150th Anniversary of the proclamation of Saint Joseph as Patron of the Universal Church in the apostolic letter entitled, Patris Corde (With a Father’s Heart). It was released on the Feast of the Immaculate Conception (December 8, 2020).

What does it mean to consecrate yourself to St. Joseph?

Well, it basically means that you acknowledge that he is your spiritual father, and you want to be like him. To show it, you entrust yourself entirely into his paternal care so that he can help you acquire his virtues and become holy. Total consecration to St. Joseph means you make a formal act of filial entrustment to your spiritual father so that he can take care of your spiritual well-being and lead you to God. The person who consecrates himself to St. Joseph wants to be as close to their spiritual father as possible, to the point of resembling him in virtue and holiness. Saint Joseph, in turn, will give those consecrated to him his undivided attention, protection, and guidance.

If you have already consecrated yourself to the Virgin Mary, can you be consecrated to St. Joseph, as well?